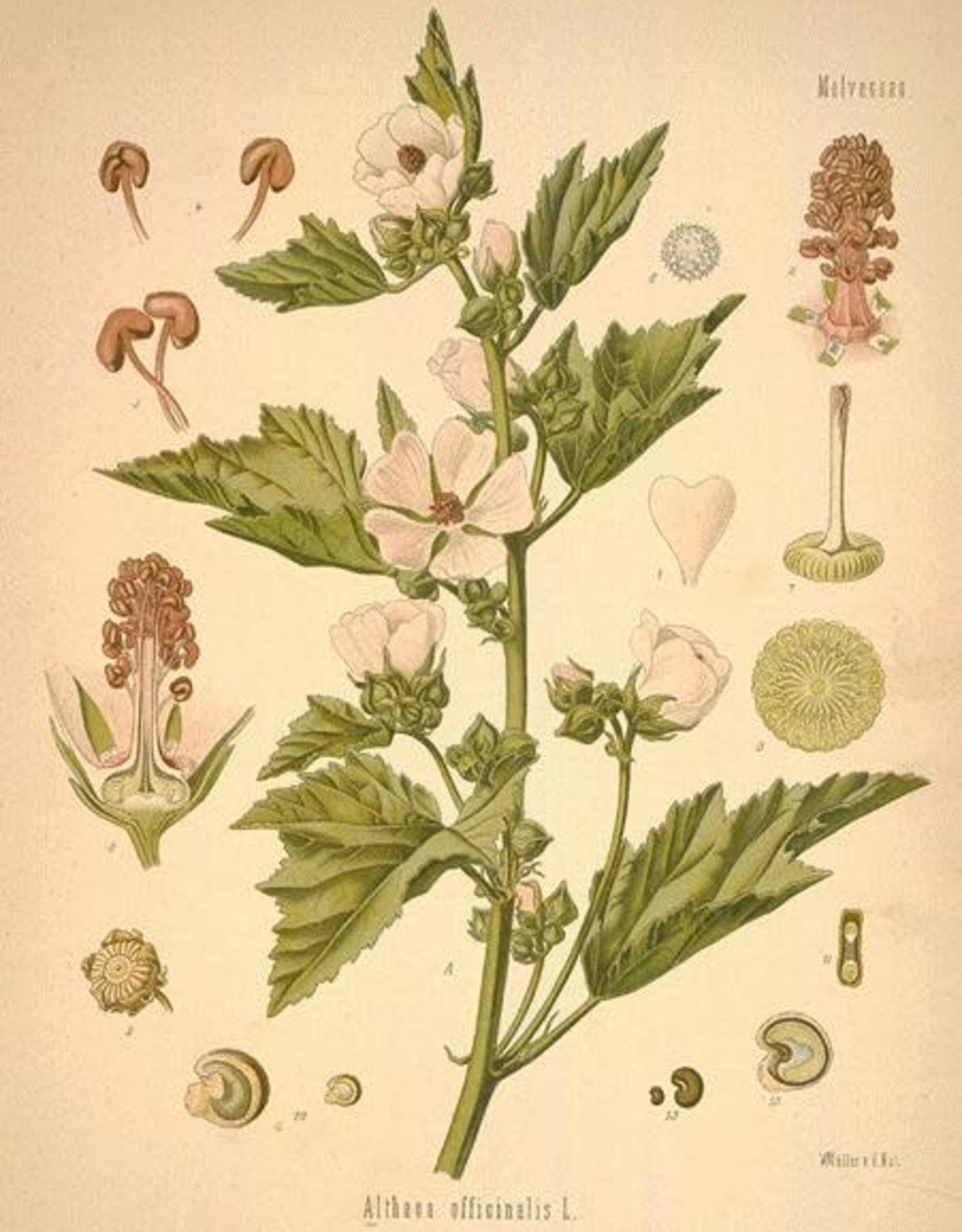 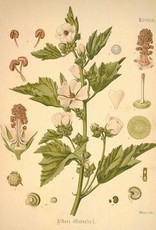 Marshmallow has been used for millennia as an edible food and for its soothing properties. Althaea officinalis is in the mucilage-heavy Malvaceae family and is an herbaceous perennial that can be found growing alongside marshes, seas, riverbanks, and other equally damp areas. Our marshmallow root is organically cultivated in the United States. It can be decocted or cold infused as marshmallow root tea. This demulcent makes a wonderful addition to herbal syrups, infusion blends, and body care creations.

Marshmallow is in the mucilage containing Malvaceae family. It is an herbaceous perennial and grows to a height of 2-5 feet with soft, velvety, and irregularly serrated leaves. Its flowers which form clusters at leaf axils or panicles, and are similar to, yet smaller than, other flowers in the related Malva genus. This plant grows in salt marshes, by the sea, along riverbanks, and other equally damp areas, hence its common name 'marshmallow.' The generic name Althaea, (a name shared with an ancient Greek goddess who was yet another lover of Dionysus) was derived from the Greek word 'altheo' meaning to heal or cure, suggesting its beneficial properties. The name of the of genus Malva, and of the Malvaceae at large, is derived from the Latin 'mollis', or the Greek 'malake' meaning soft, most likely related its softening and beneficial qualities.

A. rosea (garden variety hollyhock) is very similar to marshmallow and may be used interchangeably, yet its roots are considered an adulterant to marshmallow root in commerce. A variety of other Malva species have high mucilage content and are thus beneficial to some degree as well. Marshmallow is native to northern Africa, western and central Asia, the Caucasus, China, and in much of Europe from Denmark and the UK south to the Mediterranean. It is naturalized in the U.S, Europe, and Australia in 'marshy' areas.

Originally grown in monasteries and country gardens in medieval times, this popular herb is now cultivated for commerce in Germany, Hungary, Croatia, Italy, France, and Bulgaria. The mucilage content in the root varies greatly and is generally highest in fall and winter and is therefore best to harvest during these times. Wild marshmallow is considered a threatened plant in Germany and other parts of Europe. Due to its scarcity, there are restrictions on the importation and exportation of wildcrafted plants.

Most of the mallows are considered edible and have been used as a food source. The Romans considered a dish of mallow a delicacy. Further, the 16th century Italian physician and botanist, Prosper Alpinus, reported that the Egyptians also ate mallow. Mallow was boiled and fried with onions and butter in the Arabic speaking countries of the middle east and Asia in times of famine or crop failure. The use of the herb spread from Greece to Arabia and India, where it became an important herb in the Ayurvedic and Unani healing tradition. In Ayurveda, the root was used to reduce vata (dry constitutional type) and increase kapha (wet constitutional type) and was considered to be energetically cold, sweet tasting, and moistening.

According to naturopath John Lust (the nephew of naturopathic pioneer Benedict Lust), "Althea's particular excellence is in soothing irritated tissues." He further praises the tea of leaf and flower as a superb gargle, and a cold infusion of the root to soothe the throat. The roots contain a greater amount of mucilage than leaves and thus each lends itself to slightly different preparations and uses. The leaves are diuretic and expectorant and are used to relieve lung dryness and to soothe the urinary tract. Various herbalists have differing ideas regarding the best use of the root and plant. According to the late Michael Moore, the leaves of the similar plant A. rosea, are best topically as a poultice, and the root, for urethral stimulation. David Hoffman suggests the root to support digestion and for topical applications, and the leaf for supporting the lungs and urinary system. According to herbalists Paul Bergner and Simon Mills, marshmallow stimulates a "vital reflex" which instructs the body to moisten the mucous membranes.

Just as the ancients did, we too can eat all parts of the marshmallow. The seeds, leaves, and flowers can all be put in salad. The leaves are tasty steamed like kale or collard greens, and the root can be boiled and then fried.

As the story goes, marshmallows are one of the oldest desserts known to man, with accounts of ancient Egyptians making candies of marshmallow root and honey. These delicacies were naturally reserved for the gods and royalty. However, the first confection which resembled our modern-day treat was made in France around 1850. Made by hand until 1900, marshmallow root was added to corn syrup, egg whites, and water and was heated, and poured into molds. By 1955 there were 35 manufacturers in the US creating what we know today as the puffy, white, indispensable addition to s'mores.

Precautions
Should be taken with at least 250mL (8 oz) of liquid. Orally administered drugs should be taken 1 hour before use or several hours after, as marshmallow may slow the absorption. We recommend that you consult with a qualified healthcare practitioner before using herbal products, particularly if you are pregnant, nursing, or on any medications.